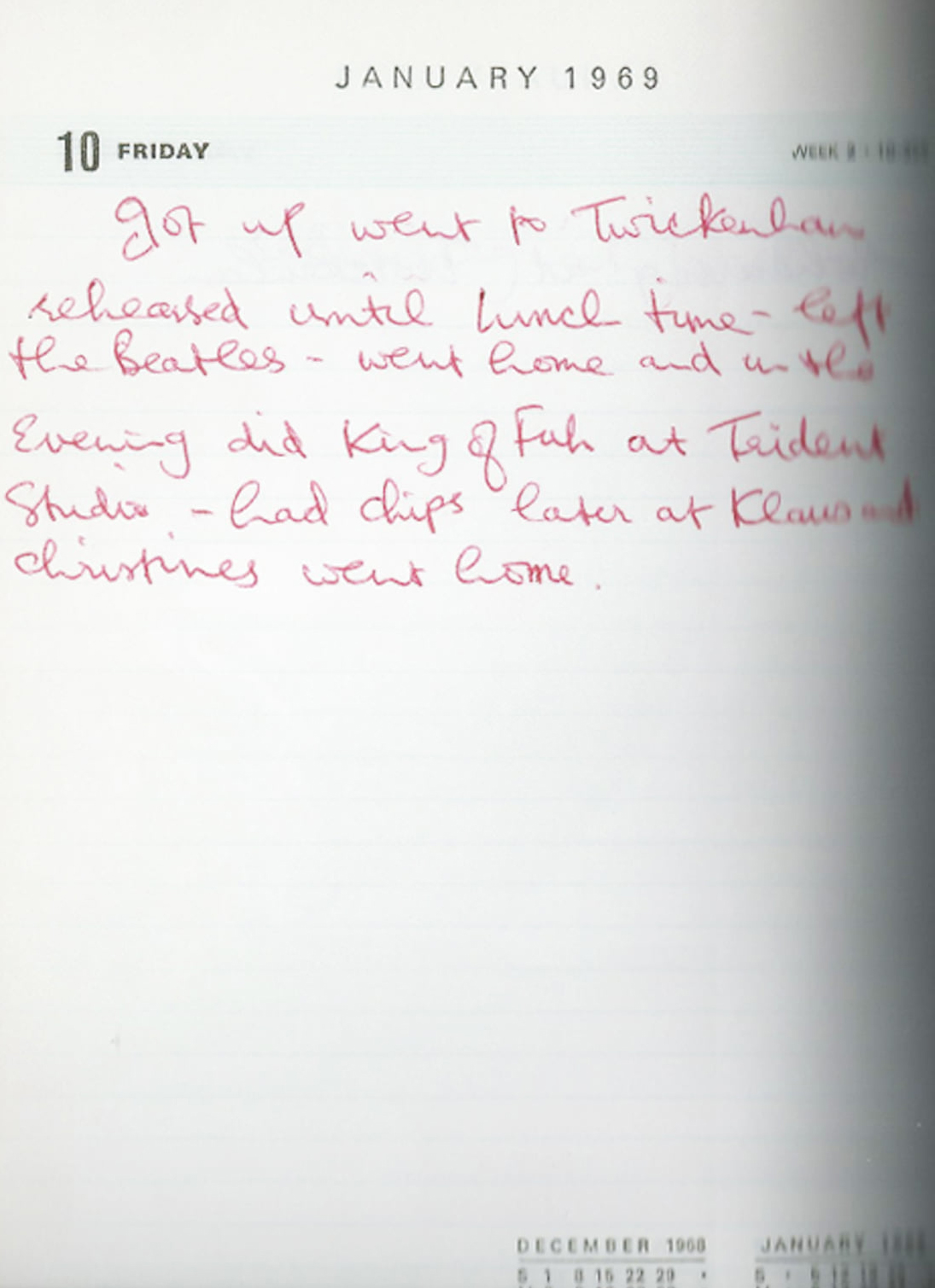 The Beatles were in the middle of their new musical project at Twickenham film studios. The idea was that they were going to perform their new album live at a big concert, which was going to be filmed, along with the rehearsals.

The Beatles convened at Twickenham on January 2nd 1969.  The venue was probably chosen as the Beatles had filmed much of ‘A Hard Day’s Night’ and ‘Help!’ there, and more recently, the videos of ‘Hey Jude’ and ‘Revolution’. During the shoot for Hey Jude the Beatles played live for the fans who had been invited along – the first time they had done so for over 2 years. The Beatles really enjoyed the occasion, which led to the idea of the new musical project. Also, Ringo Starr was due to start work at Twickenham on the film ‘The Magical Christian’ starring Peter Sellers  and produced by Dennis O’Dell – head of Apple films – who was the real producer of the Beatles’ project, although the final credit was given to Neil Aspinall.

It was obvious right from the start of the sessions at Twickenham that things weren’t entirely right with the Beatles. The venue was not conducive with making music. It was a huge film studio – not a recording studio. The Beatles also had to start rehearsing quite early each morning to fit in with the film crew. They were much more used to recording at night time.

George Harrison became the least enthusiastic Beatle for the new project. Between the end of the making of the ‘White Album’ and the start of the new project, George had been hanging out, and making some music, with his friends Bob Dylan and Eric Clapton. He was treated by both as a musical equal. Now, back in the Beatles, he was treated by John and Paul especially as an inferior – especially his song-writing. George had written several songs or the new project, but when he played them to the others they were often treated with indifference, or even disdain. He was also not keen on the idea of a big concert. George was the least enthusiastic about the Beatles touring days in the first place and didn’t want to do any more live performances. His dislike was exaggerated when it was suggested that they do the performance in a Roman amphitheatre in Tunisia, and that the Beatles should arrive there on a luxury cruise ship, playing as the ‘house band’ to the assembled fans!

Things came to a head on January 10th.  At lunchtime George decided he had had enough and effectively walked out on the Beatles. He said to the others ‘See you around the clubs’ and went home.

George later recounted the incident in the ‘Beatles Anthology’

They were filming us having a row. It never came to blows, but I thought, ‘What’s the point of this? I’m quite capable of being relatively happy on my own and I’m not able to be happy in this situation. I’m getting out of here.’

Everybody had gone through that. Ringo had left at one point. I know John wanted out. It was a very, very difficult, stressful time, and being filmed having a row as well was terrible. I got up and I thought, ‘I’m not doing this any more. I’m out of here.’ So, I got my guitar and went home and that afternoon wrote ‘Wah-Wah’.

It became stifling, so that although this new album was supposed to break away from that type of recording (we were going back to playing live) it was still very much that kind of situation where he already had in his mind what he wanted. Paul wanted nobody to play on his songs until he decided how it should go. For me it was like: ‘What am I doing here? This is painful!’

It has often been said that George’s main problem was with Paul McCartney. In the final film, George and Paul are seen having an argument about George’s guitar playing. However, contemporary accounts say that George’s main problem was with John Lennon. A few days after he walked out, George gave an interview in which he had to deny that he and John had come to blows. He said, ‘There was no punch up, we just fell out.’ It seems communication between the two had virtually stopped, and of all the Beatles, George resented Yoko’s presence at every session. This annoyance was exaggerated a few days later when all four Beatles met up to try to talk through their differences. John hardly said a word and let Yoko talk for him.

Somewhat surprisingly, John, Paul and Ringo continued rehearsing without George, with John suggesting that Eric Clapton be brought in to take George’s place. A jam session then took place, with the first song played being the Who’s ‘A Quick One While He’s Away’ – a somewhat ironic choice in the circumstances! They then undertake a jam backing Yoko’s characteristic vocals, with Yoko sitting on George’s cushion, and singing into his mic.

Meanwhile, George drove home to Esher, and in his frustration at what happened, wrote the song ‘Wah-Wah’. Later that day he went to Trident Studios, to work with Apple artist Brute Force on the controversially titles song ‘The King of Fuh’

John, Paul, and Ringo continued the sessions at Twickenham until January 15th. Another meeting was organised with George later that day. It was finally decided that George would return to the Beatles if the sessions at Twickenham were abandoned, along with the idea for a big concert. Instead, the Beatles re-convened at their new Apple Studio in the basement of 3 Savile Row. The atmosphere there was a lot better at Twickenham and culminated in the famous ‘Rooftop Concert’ on January 30th.

Some 60 hours of film footage still exists from the Twickenham and Savile Row sessions, and a new film ‘Get Back’, directed by Peter Jackson, will be released by Apple on August 27th.

Blogger Richard Porter is a Beatles Tour guide in London and author of the book ‘Guide to the Beatles’ London. For more on his tours and book go to https://beatlesinlondon.com/