Here are the official Beatles feature films, in chronological order. The Beatles released five major movies between 1964 and 1970. 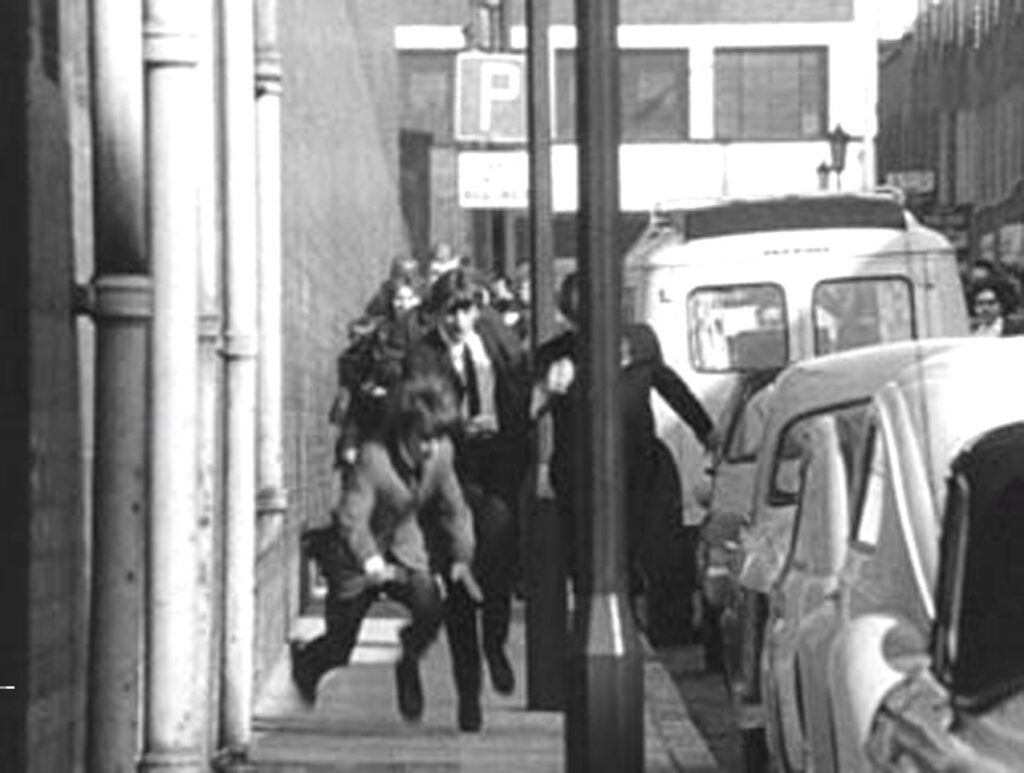 In October 1963 Brian Epstein was approached by United Artists film company to make a film with the Beatles. United Artists thought making a low budget motion picture starring them would be a good money-making exercise for the company. Even though the Beatles had yet to go to there, they knew that any soundtrack album produced would be released by United Artists own record label in the US. A very modest budget of £200,000 set aside for the making of the movie.

Richard Lester, an American based in London, was chosen to direct it. He had made the experimental short comedy The Running, Jumping, Standing Still Film with Spike Milligan. The Beatles were big fans of the film and Lester seemed the perfect choice.

Alun Owen, who had written a TV play based in Liverpool called ‘No Trams to Lime Street’, was appointed to write the script.  Owen was asked to join the Beatles in Ireland to see what the Beatles were like as people, and the mania surrounding them. He decided the film should reflect the impact of ‘Beatlemania’ and how the Beatles were prisoners of their own success.

The final title came about when John Lennon was talking to producer Walter Shenson about Ringo Starr’s misuse of the English language. After a hard day, Ringo would slump into a chair, and noticing it was now night-time would say ‘It’s been a hard day’s night’. At which point they looked at each other and knew they had the title for the film. John and Paul then had to write a song with that title, which was recorded by the Beatles on 16th April, and the film title announced to the press the next day.

Filming for A Hard Day’s Night finished on 24th April 1964 – after which the Beatles went on a world tour. They were back in time for the Premiere at the London Pavilion cinema on 6th July 1964. It was a Hard Day’s Night!

Richard Lester wanted to film to resemble a documentary, so most of the scenes were shot in real locations. Those that weren’t we filmed at Twickenham Film Studios. Some other scenes were shot close to the studios, including Ringo’s solo scene, shot in the nearby Turks Head pub. Another part of this scene was shot by the River Thames. 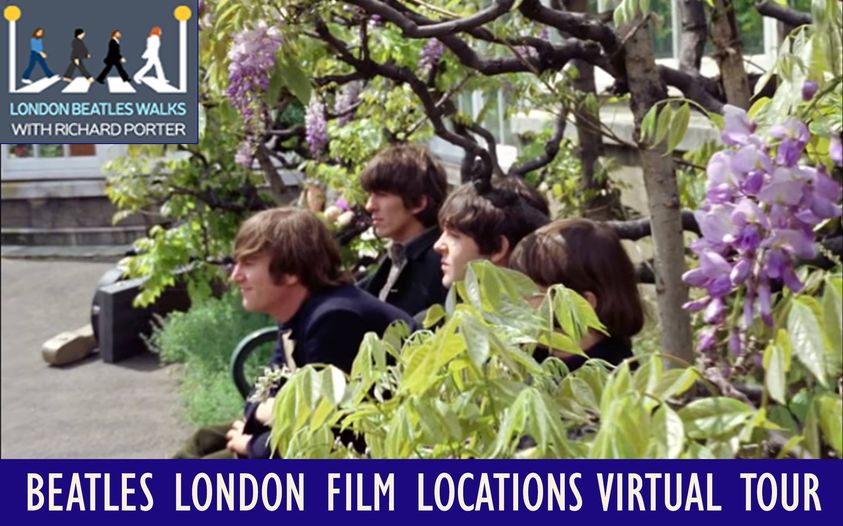 The iconic opening scenes of the film were shot at Marylebone Station in London on Sundays 5th and 12th of April.  The scene with the Beatles running by the side road was filmed in Boston Place, a side alley adjacent to the station. 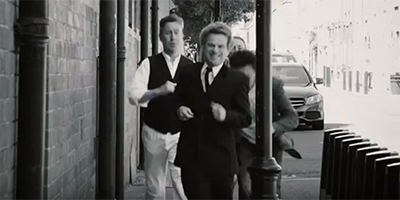 From the archives of the London Beatles Fanclub Magazine – an exclusive Behind the Scenes view of the making of the A Hard Day’s Night DVD.

The Making of the Beatles ‘A Hard Day’s Night’ DVD

Prisoners! The Beatles in A Hard Day’s Night

Ever wondered why A Hard Day’s Night looks so good as a film? 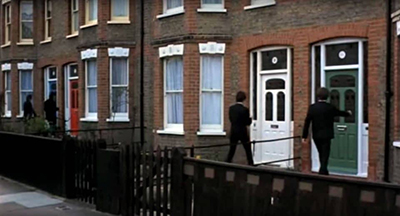 Like their first film, it took a while for the final title to be decided. When Ticket to Ride was released as a single in the US, the record label said it was ‘From the film ‘Eight Arm’s to Hold You’. That title was of course later changed to Help!

As they had already made a movie which was shot like a documentary, director Richard Lester knew he had to do something very different. Instead, writer Charles Wood wrote a story around a ring that Ringo is sent by a fan. The trouble is anyone caught wearing the ring is likely to be sacrificed to the ‘Dreaded Kaili’ – an Eastern religious sect.

Many famous British comedy actors star alongside the Beatles, including Victor Spinetti, who had also appeared in A Hard Day’s Night. After their first film, George Harrison said to Victor, “You’ve got to be in all our films, my Mum fancies you!”

Other well actors who appeared in Help! included Leo McKern, who played the head of the Dreaded Kailli, and Eleanor Bron. In fact, the other characters dominate the movie so much, that John Lennon once said that the Beatles felt like extras in their own film.

The Beatles had discovered marijuana just before they made the film, and John Lennon once said that all the best bits, with the Beatles falling around stoned, ended up on the cutting room floor.

Like its predecessor, Help! did very well at the Box Office and is now out on DVD. 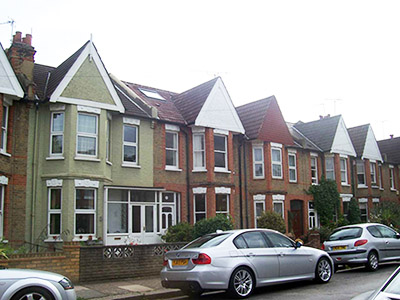 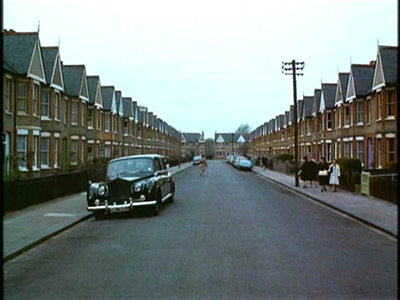 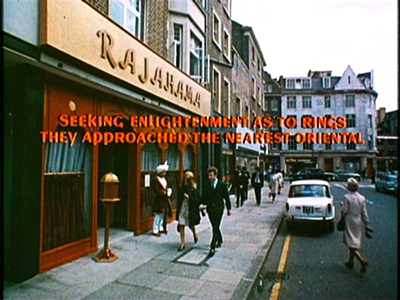 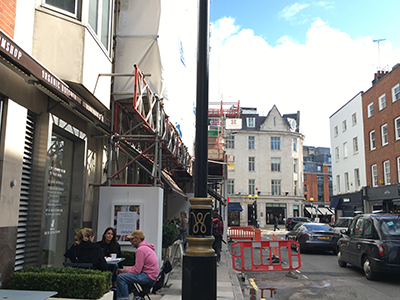 As Help! had a much bigger budget than A Hard Day’s Night, many more exotic locations were used. As well as chasing the Beatles around London, the Dreaded Kailli follow them to Austria and the Bahamas.

As A Hard Day’s Night, the interiors were shot at Twickenham Film Studios – and other scenes shot in streets nearby. For instance, when each Beatle are seen going into four separate doors, that scene was shot in Ailsa Avenue, Twickenham, about a mile from the studios.

Attempts to cut the ring off Ringo’s finger are made in South Western Road and Winchester Road, close to the Turks Head pub, which features in A Hard Day’s Night.

At one point in the film the Beatles takes refuge in Buckingham Palace. That scene was actually shot at Cliveden, then the family home of the Astors.

Help! Meghan Markle to Stay in Hotel where the Beatles filmed Part of their Second Film

Magical Mystery Tour was a TV film, written, directed by, and starring the Beatles.

The original idea for it was Paul McCartney’s. On a flight from the US to the UK in April 1967 he sketched out his plan on a piece of paper. He drew the film as a circle divided in segments, with some already filled in with his ideas of what should be done when – and who with. The other Beatle were asked to come up with ideas for the blank segments.

The main inspiration for Magical Mystery Tour were partly the acid-fuelled adventures of Ken Kesey and the Merry Pranksters, who had travelled across America in a psychedelic painted bus, and alcohol fuelled coach tours from Liverpool to see the Blackpool illuminations.

The title song was recorded by the Beatles on 25th April 1967 – but filming didn’t begin until 11th September. In between time the Beatles had released Sgt Pepper’s Lonely Hearts Club Band, and recorded All You Need is Love in front of a worldwide TV audience of 400 million people. However, the Beatle manager, Brian Epstein, died of an accidental drugs overdose on 27th August, and Paul McCartney suggested that the Beatles should start work almost immediately on their new film. He feared that if they didn’t, and went to India to study with the Maharishi, as was also suggested, they would never work again.

The film had no plot or written script. Instead, the Beatle and the cast made up scenes as they went along. Amongst those taking part was Victor Spinetti, now a firm friend of the Beatles, and making his third appearance in one of their films. Apart from the Beatles, music was provided by the cult band Bonzo Dog Doo Dah Band, who was seen backing a stripper.

Of all their films, Magical Mystery Tour showed exactly was in the Beatles’ minds at that time – albeit rather influenced by LSD. Because there was no script or running order, the film took much longer to edit than it did to shoot.

In the end, the film was sold for broadcast on BBC television. It seems that the BBC scheduled it’s showing without watching it, and it was shown on BBC1 on Boxing Day 1967 at peek family viewing time. At that time, BBC1 is still in black and white, and the very colourful nature of the film was totally lost. Next day, the press went to town to criticise the film, giving the Beatles their first critical mauling. In hindsight though, Magical Mystery Tour is an entertaining film, and as Paul McCartney rightly pointed out, the only place you can see John Lennon singing I Am The Walrus.

The cast and crew gathered in Allsop Place, by Baker Street Station and Madame Tussauds, in London on 11th September 1967 to begin filming on the coach. However, the coach was still being painted and arrived 2 hours late. The coach then began its journey to Devon and Cornwall, filming anything that happened.

Ringo and his ‘Aunt Jessie’ are seen boarding the coach in Lavender Hill, London.

One scene that was planned was filmed at the Raymond Revue Bar in Soho, London. The Beatles were seen watching a striptease by Jann Carson, backed by the Bonzo Dog Doo-Dah Band.

The interior scenes were due to be shot at Shepperton Film Studios, but it was found they were fully booked. The Beatles therefore hired an aircraft hanger in West Malling in Kent, which was the same size as a film studio. The iconic clip of I am The Walrus was shot on the airfield outside.