Prisoners! The Beatles in A Hard Day’s Night 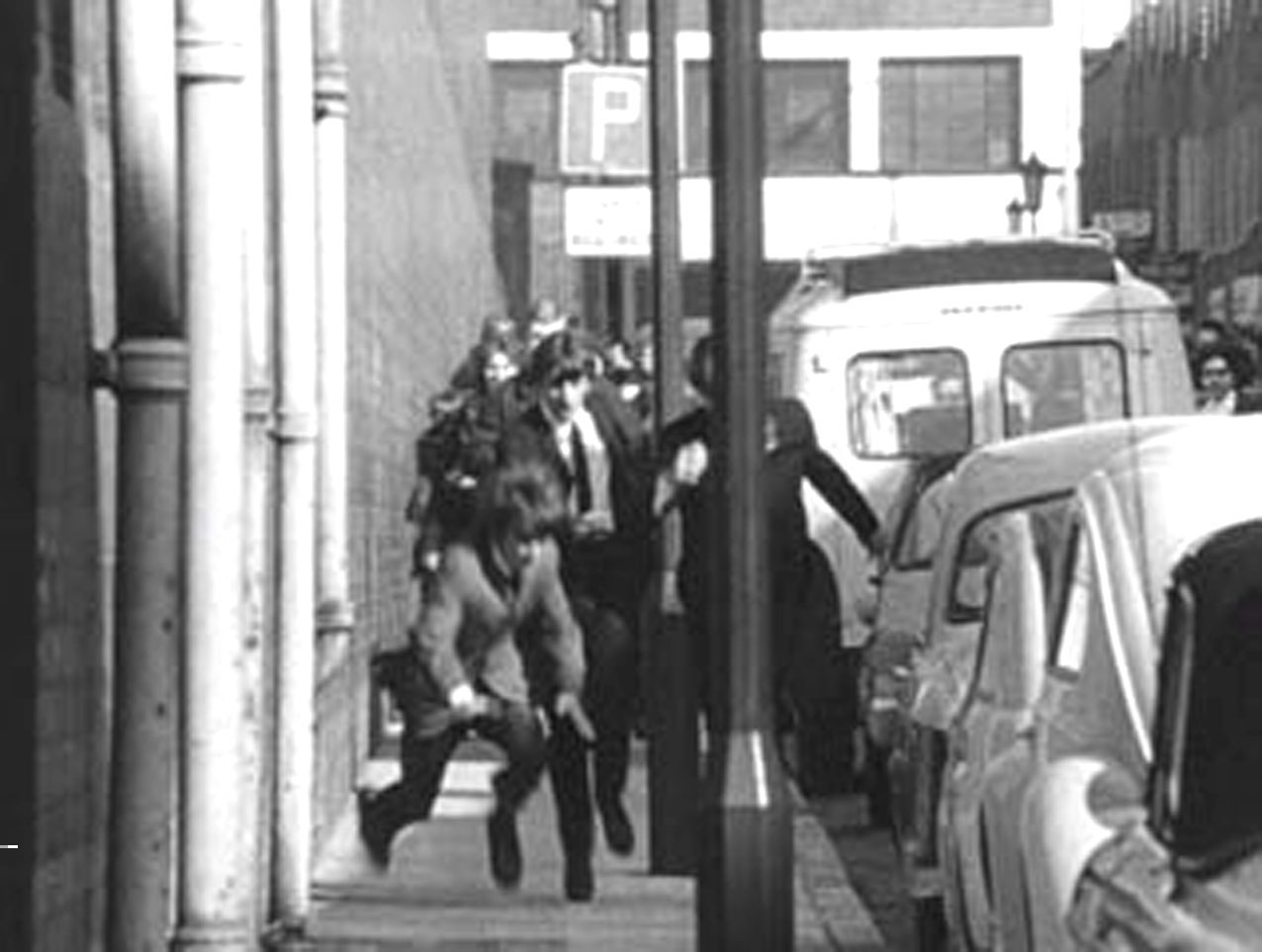 In October 1963 George H Ornstein, the European Head of Production of United Artists had the idea of making a film with the Beatles. He had seen the impact of ‘Beatlemania’ and thought making a low budget film starring them would be a good money-making exercise for the company. Even though The Beatles had yet to go to the US – Ornstein knew that any soundtrack album produced would be released by United Artists own record label in the US.

Ornstein appointed Walter Shenson to produce the film, and it was Shenson who approached The Beatles manager Brian Epstein about making it. This wasn’t the first time The Beatles had been approached about a film idea. In April 1963 they met Giorgiou Gomelsky, then the manager of the Rolling Stones, about a plan he had, but it didn’t come to fruition.

As United Artists weren’t sure that The Beatles would make it in the US, and were worried that their popularity would diminish quickly, a very modest budget of £200,000 set aside for the making of the film.

Richard Lester, an American based in London, was chosen to direct it. He had made the experimental short comedy ‘The Running, Jumping, Standing Still Film’ with Spike Milligan. The Beatles and Shenson were big fans of the film and seemed the perfect choice.

Richard Lester initially wanted Johnny Speight, the writer of hit TV comedy ‘Til Death Do Us Part’ to write the script, but he had other commitments. Instead, he chose Alun Owen, who had written a TV play based in Liverpool called ‘No Trams to Lime Street’.  Owen was asked to join the Beatles in Ireland to see what the Beatles were like as people, and the mania surrounding them. He decided the film should reflect the impact of ‘Beatlemania’ and how the Beatles were prisoners of their own success.

Early 1964 was especially busy for the Beatles. On February 7th they flew to New York appear on the Ed Sullivan Show, and to play their first US concerts. They flew back to London on February 22nd, and  the very next day filmed an appearance on TV show ‘Big Night out’. They managed a day off on the 24th – but the day after that they went to EMI Studios to start recording songs for their new film and finished first batch of recordings on Sunday 1st March.

On Monday 2nd March 1964 at 8:30am, the Beatles and the film crew gathered at Paddington Station in London to begin filming. They all boarded a specially hired train, bound for the West Country, to commence 6 days of shooting on board. Amongst those gathered was model Pattie Boyd, who played the part of a schoolgirl in the film.  During the filming she met and fell in love with George Harrison, and they married in 1966.

The opening scenes of the film were shot at Marylebone Station in London on Sundays 5th and 12th of April. Marylebone Station was chosen partly because it was closed on a Sunday and filming could be done hopefully in peace and quiet. However, word went around very quickly that The Beatles were filming there, and crowds of fans gathered to try to catch a glimpse of their heroes. For the first part of the film the Beatles are seen running down Boston Place, at the side of the station. Richard Lester decided to use some of the ‘real’ Beatles fans as extras to chase the Beatles down the street. In the mayhem, George Harrison accidently fell over and hurt his knee. When seeing the rushes though, Richard Lester decided that the scene looked good that his decided to include it in the final film.

In the first part of the film only John, George and Ringo are seen. Paul at this point is sitting on a bench in the station with his ‘Grandfather – played by Wilfred Bramble. Grandfather is traveling with them as he wants some adventure. However, at one point he complains that all he has seen so far is a train and a room, a car and a room, and a car and a room. The Beatles could not escape from their adoring fans – which is very much the overriding theme of the film. They were prisoners of their own success.

The working title for the film was ‘Beatlemania’ – and the Beatles and other suggested many other titles. As Richard Lester had directed a film called ‘It’s Trad, Dad’, someone suggested they call it ‘It’s Rock, Cock!’

The final title came about when John Lennon was talking to Walter Shenson about Ringo Starr’s misuse of the English language. After a hard day, Ringo would slump into a chair, and noticing it was now night-time would say ‘It’s been a hard day’s night’. At which point they looked at each other and knew they had the title for the film. John and Paul then had to write a song with that title, which was recorded by the Beatles on April 16th and the film title announced to the press the next day.

Filming for A Hard Day’s Night finished on April 24th 1964 – after which the Beatles went on a world tour. They were back in time for the Premiere at the London Pavilion cinema on 6th July 1964. It was a Hard Day’s Night!

Writer Richard Porter is the author of ‘Guide to the Beatles London’ and a London Beatles Tour Guide. For more on his book and tours go to https://beatlesinlondon.com/

1 thought on “Prisoners! The Beatles in A Hard Day’s Night”