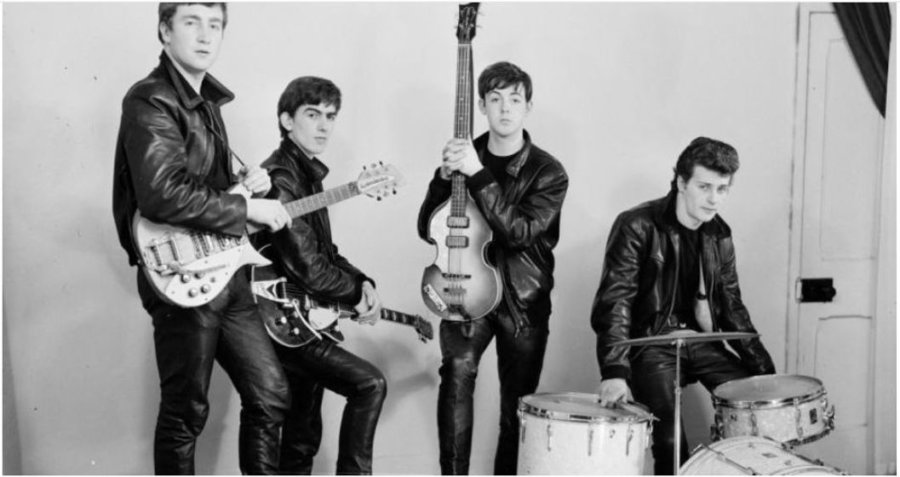 The Beatles audition with Decca Records took place on  New Year’s Day 1962. The session had been secured through the Beatles new manager, Brian Epstein, and Mike Smith from Decca, who had already seen the Beatles perform at the Cavern Club in Liverpool.

The Beatles had travelled down from Liverpool the day before in Neil Aspinall’s battered van. In those days, before the motorway system was built, it would have taken them about ten hours. Brian Epstein travelled down by the rather more luxurious inter-city train. When the Beatles arrived in London they went straight to their hotel for the night – the Royal in Russell Square. Despite the hotel’s regal name, it was far from palatial.

As it was New Year’s Eve, the Beatles decided to soak up the atmosphere of London and asked their way to Soho. They ended up in a pub close to Trafalgar Square where they drank in the New Year. However, they didn’t stay long due the importance of the next day.

Probably unknown to the Beatles, their audition took place in the same room that Lonnie Donegan recorded ‘Rock Island Line’ in 1954 – the song that greatly influence the Beatles and pretty much every UK musician in the 1950s and 60s.

The Beatles were very nervous – and their mood wasn’t helped by Decca refusing to let them use their own amps, which they had transported from Liverpool. Instead, they had to use Decca’s ‘in house’ unfamiliar amps.

The Beatles sang 15 songs that day, only three of which were Lennon/McCartney originals – the rest were cover versions. John Lennon later blamed Brian Epstein for playing safe with the songs he chose. Rather than stick to the songs the Beatles regularly played on stage, like Long Tall Sally, they sang ‘standards’ like Besame Mucho and The Sheikh of Araby. However, whether Brian has chosen the repertoire, or the Beatles themselves, has been debated ever since.

Surprisingly maybe, John and George sang four songs each, while Paul sang seven. Vocally, George’s performance was the best, but Paul was wracked with nerves, and his singing was sub-standard for him – especially on ‘Til There Was You’.

Much has been said about Pete Best’s drumming at the audition, but in reality, his performance was no worse than the others.

It was unusual for so many songs to be recorded at an audition, so it is likely that Decca might have taken some of the best recordings that day to release as singles, if the Beatles were given a contract.

Immediately after the audition Mike Smith was reasonably enthusiastic about the group’s chances of getting a recording contract, but many weeks later Decca decided to turn the Beatles down. They were going to sign London based Brian Poole and the Tremeloes instead!

Even though Decca have been derided in the past for turning down the Beatles, and with hindsight it does seem a strange decision, it has to be remembered that many other companies turned them down without even auditioning them. With hindsight, their rejection by Decca could have been one of the best things that happened to the Beatles. If they had been signed, they might have only made one or two singles, and then dropped; they might never have met George Martin; and never become the world-conquering group we know and love to this day.

The former Decca Studios are now the rehearsal studios for the English National Opera.

The Beatles Decca Audition – in the words of the participants

“Someone at Decca House had to show an interest because Epstein ran NEMS, which was an important account for the sales people. I went to Liverpool on December 13 and met up with Brian who took me for a very splendid dinner at some plushy place where they knew him. The we headed for The Cavern. I was very excited by what I saw The Beatles do on stage, they were wonderful, and on the strength of their stage show and the reaction from the local fans I had no hesitation in telling Brian that we’d fix an audition as soon as possible”

We met a London group who had what later became known as ‘Beatle boots’. The first pair I ever saw was on that trip. They had elastic in the edges and I later found out they were made in a shop on the Charing Cross Road called Anello and Davide

At 11am on January 1st we arrived at Decca in a thin bleak wind, with snow and ice afoot. Mike Smith was late and we were pretty annoyed about the delay. Not only because we were anxious to tape some songs but because we were being treated as people who didn’t matter.

Brian Epstein – A Cellarful of Noise.

In the square we joined in the singing of Auld Lang Syne, kissed a few willing lips but we didn’t exactly let ourselves rip, and we didn’t even dip as much as a finger into the icy waters of the fountains, where the usual bravehearts were trying to catch pneumonia. The implications of the audition were uppermost in our minds; at last The Big Time was beckoning. Decca was a name known throughout the world and we had to be ready to take them by storm in the morning.

Maybe I should have trusted my instincts and signed them on the strength of their stage show. In the studio they were not good and their personalities didn’t come across. Maybe they were in awe of the situation.

Of course, I kicked a lot of furniture in the year or two afterwards when The Beatles started to happen for George Martin over at EMI.

I would like to have auditioned the group when they had a better range of songs to offer, but NOT after they fired Pete Best. In my humble opinion he was a better drummer than Ringo

We hadn’t said anything yet to Brian Epstein, who was then putting pressure on Decca because now he had been to other companies. So, I went up to Liverpool to see The Beatles. I didn’t even tell Mike Smith. I went there and it was pissing with rain. It was falling down in buckets, and I went out to the Cavern and the place was crowded. You couldn’t get in, and what with the rain outside, I was getting drenched. I thought, Oh sod it, and I walked away. How could I have been so stupid? The very fact I couldn’t get in because it was so full should have struck me. But it didn’t. I think it was the rain, and the fact I was getting soaked, made me walk away from it. And that’s how we made that cock up.

Dick Rowe – Quoted in The Beatles – Inside the One and Only Lonely Hearts Club Band.

Blogger Richard Porter is a Beatles Tour Guide in London, giving both virtual tours and walking tours. He is the author of ‘Guide to the Beatles London’ and the forthcoming ‘Beatles Fab Four Cities, Liverpool, Hamburg, London and New York. For more information on his tours and books go to https://beatlesinlondon.com/