The Beatles and Soho 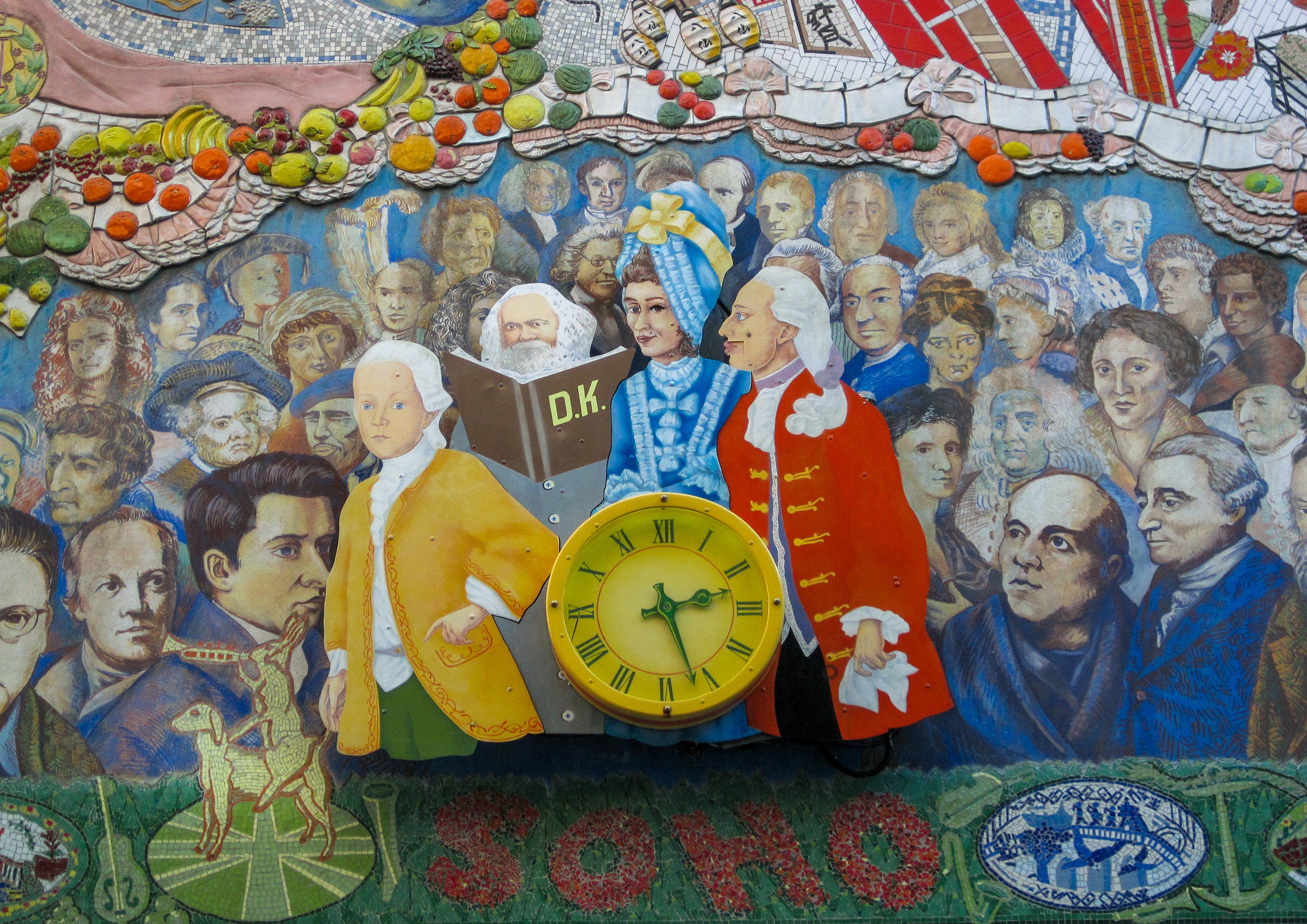 Where would you go in London in 1960s if you are in search of risqué excitement and want to be with the ‘in crowd’ of rock musicians, pop artists and fashion setters? Soho, of course. The area of Central London between Tottenham Court Road and Piccadilly Circus buzzed with sparkling energy of clubs, coffee bars, ‘dedicated followers of fashion’, theatres and other places of entertainment, including the ones that gave the area its reputation as London’s ‘red light district’.

The area started growing as London’s fashionable aristocratic residences in the 17th century. It took its name from its history even before then – a former Henry VIII’s hunting ground, when the forests were filled with the shouts of ‘Soho!’, by the hunters in their excitement.

Echoes of its hunting past – and of its many historic antics – are depicted on the Spirit of Soho Mural, which appeared in 1991 on the corner of Broadwick Street and Carnaby Street. Historic worthies like revolutionary Karl Marx and comedian Groucho Marx (only in Soho!) composer George Frederic Handel, poet William Blake are huddled together with Italian playboy Casanova, and jazz musician George Melly, among theatres, markets, fashion stores and international cuisine, presided over by St.Anne, – a church in her name being the centrepiece of the area.

For a Beatles fan, even a quick glance at the mural invokes a Beatles connection – Sgt. Pepper’s cover design, with young Mozart, Karl Marx, Casanova, Theresa Cornelys as centrepiece!

The Beatles connections with Soho can make the subject of several tours. Being at the heart of music and trend setting in the 60s, the Fab Four regularly came here for fun and work. In the 1950s Soho was a music trailblazer, with venues like Club Eleven, where modern jazz was first performed in the UK, traditional jazz 51 Club, the London Skiffle Centre, – also the first in London, The 2i’s Coffee Bar – one of the first rock and roll venues in Europe. Theatres, clubs and bars were interlaced with sex shops and striptease clubs. Beatniks, Mods and aspiring musicians of all kinds gravitated to Soho.

John Lennon had a laugh at the private members club, which were catering for the Swinging London crowd. In the 1966 comedy sketch by comedians Peter Cook and Dudley Moore John welcomes visitors to the ‘Ad Lav’ club – men’s toilets in Broadwick Street, ‘follow your nose, when entering’! It was a pun on the Ad Lib, where the Beatles and other rock stars used to gather. The London Palladium theatre saw the birth of Beatlemania in 1963, and the NEMS Enterprises headquarters next door were where the Beatles came on many occasions, including the ill fated interview where a ‘bigger than Jesus’ quote from John Lennon sparked a hate campaign in the USA, which ultimately lead to the end of touring for the group.

Soho even had its own recording studio – in 1968 the Sheffield brothers set up Trident Studios in St. Anne’s Court. A progressive alternative to the traditional approach to recording techniques of EMI’s Abbey Road, it flourished after the Beatles came here in 1968 to record Hey Jude and some White Album tracks. The rest of the street was part of the Soho red light district – with brothels and strip joints lining the street.

Just across the road from Soho, No. 3 Savile Row was the headquarters of the Beatles’ company Apple, which saw the Beatles in the final years of the group, and the eventual breakup – but not before the last live concert on the roof!

Paul McCartney returned to Soho, albeit the confines of the respectable Soho Square. When Paul formed his company MPL in 1970s, its’ offices were at No. 1 Soho Square – between the headquarters of film giant 20th Century Fox and British Board of Classification – UK’s official film censor. Even now Paul is often in the area when he is in London, and I was lucky to meet him several times when he was going in and out of his office.

And if you are in Soho, be sure to drop to a place close to George Harrison’s heart – just around the corner from Soho Square, on Soho Street, is Govinda restaurant. It is run by the Radha Krishna Temple, whose London headquarters are adjacent to it.

With Crossrail building works and ‘gentrification’ threatening to take over the old spirit of Soho, looking into the history of the Beatles in the area helps preserve its unique cultural heritage and discover the secrets of its turbulent and exciting past.

For more on the Beatles in Soho, come on my Beatles In Swinging London Virtual Tour Sunday 28th March at 7pm https://www.eventbrite.co.uk/e/beatles-in-swinging-london-tickets-128875579327