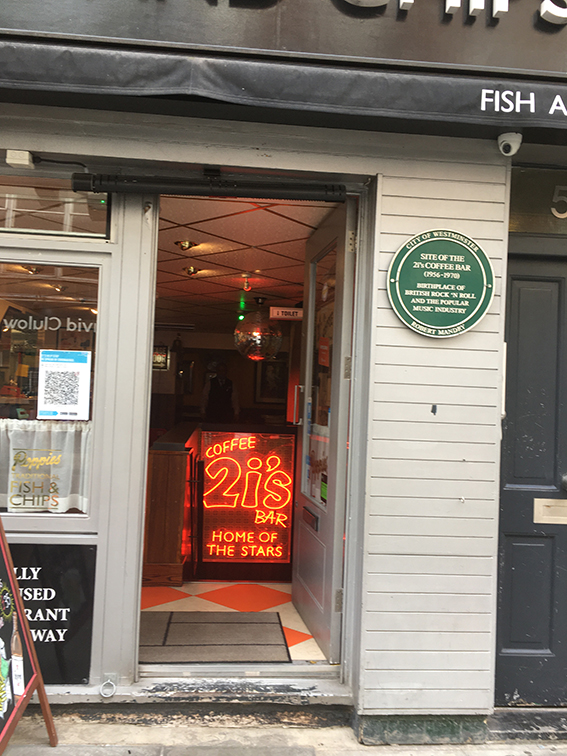 On November 16th 1957, the Best family of Hayman’s Green, Liverpool, were watching the TV show, ‘Six Five Special, which was so called because it went out at 6.5pm (6:05pm) on Saturday nights. Normally it was broadcast from BBC studios, but this night it was live from the 2 Is Coffee bar. They were very taken by what they saw and decided to use the basement of their large house into a coffee bar with Rock and Roll. They called it the Casbah Club, inspired by the film ‘Algiers’ where the star, Charles Boyer, says ‘Come with me to the Casbah. The 2 Is Coffee Bar was at 59 Old Compton Street, next to another coffee bar ‘Heaven and Hell’.The Irini brothers, Sammy and Freddie, used the first letter of their name for the venue. But it really started to become known from April 1956 when the lease was taken over by Ray “Rebel” Hunter and Paul “Dr. Death” Lincoln, both Australian wrestlers. They thought that the prime location between Wardour Street and Dean Street would ensure abundant passing trade, but they were soon becoming concerned as the whole Street was jam-packed with other Coffee Bars. As a result, at the beginning, trade was not exactly brisk.However, fate was at hand. The summer of 1956 saw the annual Soho Fair, which, on July 14th 1956 included a procession around its narrow streets. During the procession, Vipers Skiffle Group had been playing on the back of a flatbed truck. When it started raining, their truck stopped outside the 2 Is, and the Vipers went inside to shelter. While in the 2 Is, they played some songs, and people following the procession came in too, and bought lots of coffee. The owners of the 2 Is asked the Vipers to come back in when they wanted, and the Vipers became the house band of the 2 Is.In September 1956, the Vipers backed their mate Tommy Hicks at the 2 Is. In the audience is A and R man of Parlophone records, George Martin. Martin was unimpressed by Hicks, but signed the Vipers.Publicist John Kennedy had seen Tommy Hicks playing at the 2 Is and told Larry Parnes about him. Parnes signed the newly named Tommy Steele to a management contract, and started signing up more acts, and changing their names to suit their images. Ron Wycherly became Billy Fury, Reginald Leonard Smith became Marty Wilde, John Askew became Johnny Gentle. Many of his artists appeared at the 2 Is, including Johnny Gentle. Gentle was backed by the Beatles on their first professional tour, or Scotland in 1960.Some of the future stars who performed at the 2Is were Cliff Richard, Hank Marvin, Jet Harris, Tony Meehan, Brian Bennett, Brian ‘Licorice’ Locking, The Vipers, Tommy Steele, Tony Sheridan, Rory Blackwell, Joe Brown, Clem Cattini, Screaming Lord Sutch, Mickie Most (as The Most Brothers), Paul Gadd (who became Paul Raven and later Gary Glitter), Johnny Kidd, Big Jim Sullivan, Terry Dene, Carlo Little, Richie Blackmore, Wee Willie Harris and Eden Kane. Peter Grant was employed there as a ‘bouncer’ prior to his career as the manager of Led Zeppelin and Marc Bolan worked there as a waiter. The bar was featured in Cliff Richard’s second film, ‘Expresso Bongo’, made in 1959.It took a long time for the Best family to bring the Casbah Club to fruition. It finally opened on August 29th 1959. The first group that were due to appear were the Les Stewart Quartet. However, the day before the opening the group had a big row – and broke up! The two remaining members decided to go ahead with the gig, but needed two more people. One of the remaining members was George Harrison, who had played with the Quarrymen before their gigs dried up. George rang up his fellow Quarrymen members, John Lennon and Paul McCartney, to ask them if they would like to do the gig. They agreed, so John, Paul, George and Ken played at the opening night of the Casbah Club as the Quarrymen. Ken left the band soon afterwards – but the other three went on to be quite famous.