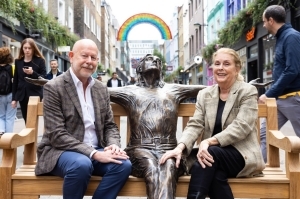 A life-size sculpture of John Lennon entitled ‘Imagine’, after one of the famous singer/songwriter’s signature songs, is set to grace the top end of Carnaby Street this Saturday, 9 October, on what would have been his 81st birthday.

Created in 2009 by acclaimed American/British sculptor, poet, playwright, lyricist, novelist and actor, Lawrence Holofcener, who sadly passed away in 2017 aged 91, the sculpture is being brought to its new location – outside of the world famous Liberty London store – by his widow, Julia Holofcener, in partnership with Shaftesbury.

The stunning bronze statue of Lennon, with his arms outstretched, head tilted up and legs crossed on a bench, could not be more fitting for Carnaby Street – a place where The Beatles often went to get kitted out at the likes of Lord John in the Swinging Sixties and frequented iconic clubs such as The Bag O’ Nails, where Paul McCartney met his future wife Linda Eastman.

Simon Quayle, Executive Director at Shaftesbury says: “We are delighted to welcome this fantastic sculpture to Carnaby, adding to the rich musical heritage of the area going back as far as the 1920s. The sculpture will give visitors a great photo opportunity with one of the world’s most iconic British musicians”.

Holofcener’s other sculpture is ‘Allies’ on Bond Street, which features war-time US President Franklin D. Roosevelt and our very own Winston Churchill, on a bench in conversation. It was unveiled by Princess Margaret in 1995 and has become a London landmark, as well as a poignant symbol of long-lasting alliance between America and Britain.

‘Imagine’ was Lennon’s second solo album – released 50 years ago this year, on 9 September, 1971, following the break-up of The Beatles. The opening title track, with the famous lyrics “imagine all the people living life in peace”, is still as powerful now as it was then.

Holofcener led a colourful life and his acting career began in a nightclub revue in New York at the ‘Upstairs at the Downstairs’. His first theatre job was in ‘Stop the World – I Want to Get Off’ on Broadway. Then, in 1964, he played Cornelius in ‘Hello, Dolly!’, first with Carol Channing, then with Ginger Rogers.