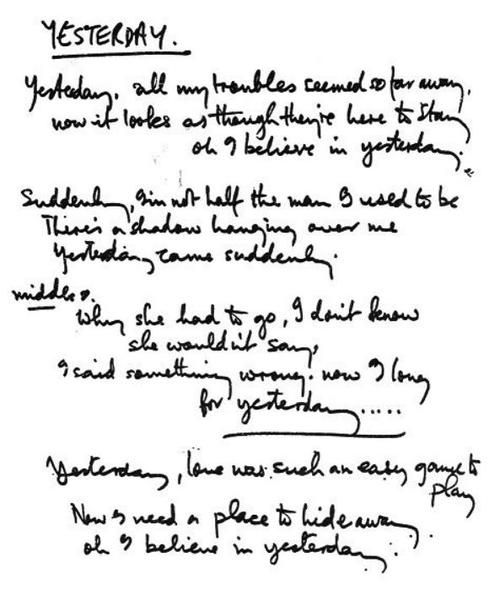 Yesterday holds the world record of the song with the most cover versions of all time – with over 3000 recordings in existence. It has also been played over 8 million time on US radio, making it the second most played ever. But how did Paul McCartney write it?

Paul McCartney had met Jane Asher at the Royal Albert Hall in April 1963 when the Beatles were playing at a special concert for BBC Radio – and Jane was asked to do a photo shoot for the BBC ‘Radio Times’ magazine. They met backstage and started dating soon afterwards.

Paul soon met Jane’s family, including her brother Peter, who was part of the duo ‘Peter and Gordon’ and Jane’s Father and Mother. Paul became such a regular visitor to the Asher’s family home at 57 Wimpole Street that the Asher family asked Paul if he should make their house his London base. The Ashers were very liberal letting their daughter’s boyfriend live in their family home! At the time Paul was sharing an apartment with John, George and Ringo, and readily agreed to move into the Asher’s house. Paul was given small room at the top of the house. He later called it his artist garret. Beside the bed he had an upright piano.

Early one morning Paul woke up in his bedroom with a tune in his head. He went straight over to the bedside piano to play it. He initially thought the was remembering the tune from someone else’s. Paul’s father was a former jazz musician and would often play him ‘standards’. Paul thought he was remembering one of those.

It wasn’t long after the dream that Paul visited the home of Alma Colgan at Stafford Court on Kensington High Street. The Beatles met Alma when they appeared on Sunday Night at the London Palladium on January 12th 1964. Alma was not admired by the Beatles before they met. In fact, John Lennon used to make horrible jokes against her and pull crazy expressions on his face to try to imitate her. However, their attitude changed when they met her in person. They all got on like a house on fire, and Alma invited them all back to her flat that she shared with her mother and sister, Sandra. Alma allegedly had an illicit relationship with John Lennon, and Sandra with Paul.

It wasn’t long after they met that Paul McCartney played the still wordless tune to Alma and her sister, Sandra on the family piano.As he sat playing the tune to Alma and Sandra, their mother Fay walked into the living room and asked if anyone would like some scrambled eggs. McCartney sang the words on top of the melody, improvising for the next line: “Scrambled Eggs, oh baby, how I love your legs.”

There has been much confusion as to when Paul McCartney had the dream. In his book ‘Paul McCartney, Many Years from Now’, which he wrote in collaboration with Paul, states that it was in May 1965. However, many people think it was much earlier than that. In late 1964, The Beatles hosted ‘Another Christmas Show’ at Hammersmith Odeon. On the bill were the Yardbirds, featuring Eric Clapton on guitar. Chris Dreja, the rhythm guitarist of the band, told me that one night, Paul McCartney came into their dressing room with this guitar and played them ‘Scrambled Eggs’ and asked what they thought of it. This puts the dream much earlier than Paul states.

But we can go further back than that. In January 1964, the Beatles played a season at the Olympia Theatre in Paris, staying at the very plush George V Hotel. While there, Paul asked for a piano to be moved into their suite so he could do further work on his new composition.

So, it seems that Paul’s dream dates back to late 1963/early 1964 – much earlier than May 1965! However, we do know that Paul finally wrote the lyrics in Portugal when he and Jane Asher went on holiday there on May 27, 1965. Paul started sketching out the words in the back of the limo taking he and Jane from the airport to where they were staying. But who/what is the song about? Was it about a lost love? In a way, yes. Paul McCartney lost his mother, Mary, to breast cancer when he was just 14 years old. He later admitted he was writing about her. “Why she had to go, I don’t know, she wouldn’t say’.

Yesterday was finally recorded on June 14th 1965 during the ‘Help!’ sessions. Producer George Martin persuaded Paul that a string quartet should be used on the song, rather than the other Beatles.

Yesterday was released as a single in the US, and unsurprisingly made number one in the US charts. However, the Beatles didn’t want a ballad as a single in the UK, and it’s released was delayed until 1976.Blogger Richard Porter is a Beatles tour guide in London, and author of the book ‘Guide to the Beatles London. For more on his tours and book go to https://beatlesinlondon.com