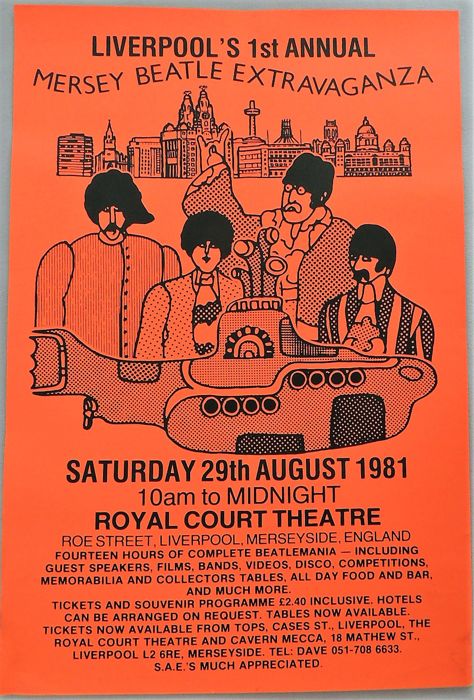 In August 1981 I attended my first annual Beatles convention in Liverpool – but certainly not my last – since then I’ve been to 35!

I had been a Beatles fan for about five years – but didn’t know many other fans. It was through a penpal that I heard about the Beatles convention to be held in Liverpool in August 1981. I was amazed that such a thing existed and arranged to go. My parents thought I was absolutely mad. It has to be said that Liverpool had a bad reputation at the time and not seen as the tourist destination it is today. Also, there had been serious riots in the city just a few weeks before. But I went anyway – and it was a real life-changer.

I distinctly remember entering the Adelphi Hotel and seeing 1000 like minded fans there – I was not alone! I had felt something of an outsider at school etc – but as soon as walked in to the convention I felt ‘at home’. I was amazed at he number of dealers there – and guest speakers who knew the Beatles, including the legendary Victor Spinetti, who appeared in three of their films.

It was only a few months after the murder of John Lennon, and for me the highlight of that convention was when Victor Spinetti unveiled a statue of John and everyone spontaneously sang Give Peace a Chance. It was a really moving moment.

I enjoyed myself so much I missed my last train home to London! I had no money for a hotel room, so I spent the night in the lounge of the Adelphi. Many of the guest speakers were having post convention party and asked my to join them – so I spent many hours in the company of Victor Spinetti, former Beatles manager Allan Williams, and Cavern DJ Bob Wooler.

The next morning I was standing outside the Adelphi, preparing to walk back to Lime Street Station, when I saw Victor again. I asked him if he was heading back to London – but he said he was about to be picked up by a friend. I wish I had stayed around talking to him – as I later found out that the ‘friend’ was Paul McCartney!

When I finally got home to London I starting reaching out to other fans, and was delighted to meet a group of like-minded people in London. In 1982, 15 of us travelled up to Liverpool from London.

Since 1981 I have only missed 5 conventions. In that time I have met people there from all over the world – some of whom have become life long friends, but this year decided not to go due to lack of money, and the ongoing threat of Covid – but all being well, I will be back next year!

1 thought on “August 1981- My First Beatles Convention in Liverpool”